I have always had the desire for adventure and for traveling. I grew up in Illinois and after moving to San Diego, I fell so in love with my new home that I did not think I could leave it for a full semester. As I was finishing my second year, though, I realized that experiencing a new culture, long term, was something I needed to do.

I also felt that while I only needed one class to complete my Spanish minor, I was not fluent. So I began searching through Central and South American countries. Since I did not plan to go abroad as a freshman, I actually did not have as many options to choose from. Luckily I did find a program at Universidad Veritas, San Jose, Costa Rica. The semester runs from March to the end of June.

Since I rented my house in San Diego for fall semester, I packed up my bags and left early January to move to San Jose.

“This was the first time I showed up to a town with no plan, no reservation of a place to stay and no friend waiting.”

Those first several weeks here were some of the best of my life. Costa Rica is known for its biodiversity, volcanoes (more than 120), waterfalls, coffee and the Pura Vida (simple life) lifestyle. Ticos (locals) can have a full conversation with using only the phrase Pura Vida. It means everything from a greeting to describing a good situation.

This country is very friendly and peaceful (it does not even have a military). The food here is always so fresh and inexpensive. At the local farmer’s market, I can get fruits and vegetables for the entire week for less than $11. The only complaint I have is the lack in hot sauces! After a couple weeks though, I did learn which few stores sold it and where I could buy spicy peppers to make my own salsa, so I’m back to all smiles.

I have learned it is sometimes better to not have a plan, just go with the flow and try to talk to strangers. There was one occasion where my roommate and I tried to visit a volcano, and after speaking with the bus driver who was confident he knew where we were going, we got on the bus and rode two hours in the wrong direction. That was frustrating initially but we learned to laugh at the situation and we met some really interesting people on the buses round trip to Puerto Viejo en las montañas. After that I also learned to have more confidence when talking with people and to ask for clarification if I think there is even slight confusion.

I have been lucky enough to have many friends in Costa Rica, so generally I get to adventure in good company. However, during Holy Week (Easter) we had a week off of school. This is a religious holiday celebrated by a large portion of the country. There are daily processions in each town, people get some time off of work and above all, families spend time together. During this celebration, I did my first trip completely alone. It was short but I learned a lot about myself and this country.

Monday afternoon I departed from Quepos, a small beach town on the Pacific Coast and took the three-hour bus ride to Puntarenas. This is an adorable small town that is located on a very thin peninsula that was man-made. I arrived just in time to walk to the beach and watch the sunset. I then inquired at several establishments to find a place to sleep for the night. I found a cheap room with a private bathroom. At first I was quite uncomfortable as it seemed a little shabby but the owner was very nice and it was a secure place.

This was the first time I showed up to a town with no plan, no reservation of a place to stay, and no friend waiting. After settling in, I took a walk around the town. I found a place to eat that was busy so I thought it would be good. I had a typical Costa Rican meal, casadas. Casadas is a meal of rice, beans, vegetables, fried plantains and a protein. I chose fish and it was incredibly fresh and delicious. I also had a water-blackberry smoothie (smoothies here are simply fruit blended with only water or milk).

When I was finished eating I continued wandering around the town and found a procession with the church in celebration of holy week. I joined in with the whole town and we walked for about an hour and a half. They told the story of Jesus’ crucifixion and prayed at multiple stops along the way. The stops had small stages set up as reenactments of the part of the story being told. 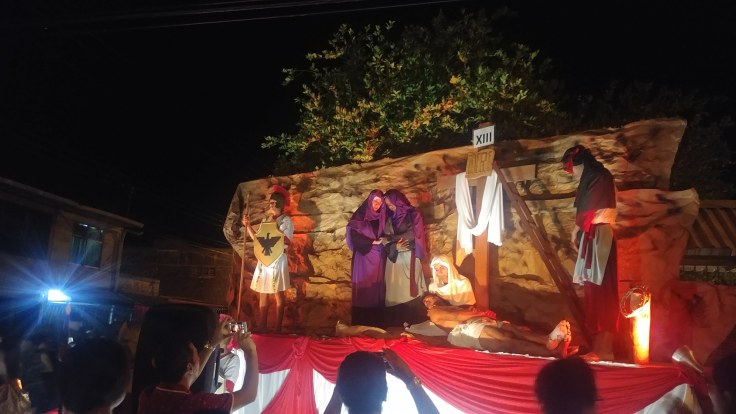 The next morning, I ran to the end of the town, where their main port is. This was an incredible experience, too, as the town is so narrow that while standing in one place you can see the ocean on both sides of the peninsula (the city is only four blocks across at the widest part). 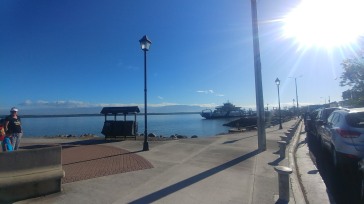 After showering I had another typical breakfast, rice, beans, eggs, tortillas, plantains and coffee. Then I went to the aquarium. I spoke with employees there and learned that their goal was to focus on rehabilitation and education. Some fish are part of breading processes, and others like the sharks, rays and turtles, were rescued because they were injured and are being rehabilitated to returned to the ocean. One ray in particular had a large abrasion along its entire stomach, the employee there explained that with their help it will be able to heal quicker and will be returned to the ocean.

This small adventure forced me out of my comfort zone; I had to rely on my own Spanish skills and be confident while conversing with strangers. I learned to become comfortable in an environment I knew very little about. I am thankful for experiences as this because I get to learn about other people, their culture, and even myself.

Holly Baker is an art senior. She is studying abroad for a semester at at Universidad Veritas in San Jose, Costa Rica