Ask anyone what comes to mind when they think of Germany, and their response will likely be “lederhosen,” “pretzels” or “beer.” These three concepts have a pretty specific tie to Bavaria’s Oktoberfest, and Germans from just about every other state would be the first to correct you. However, beer in Germany has a long and exciting history, and has evolved into its own culture-within-the-culture.

Drinking culture in Germany is vastly different from that of the United States. From my observations, alcohol in the U.S. is treated as a taboo, with the 21 and over drinking age, but also often an unspoken understanding once a person reaches his or her senior year of high school or college. The depiction of wild parties permeates the media, from movies like “Project X” and “Superbad,” to literally any show set in a high school or college town. So, although we impressionable youngsters “shouldn’t” be drinking, it’s well understood that we probably are. Once someone does reach the ripe ol’ age of 21, it’s almost a rite of passage that they spend an evening barhopping with friends and wake up the next day with no recollection of the night before.

In my personal opinion, the epidemic of college binge drinking has its roots in the attitudes toward alcohol in the U.S. – it’s a forbidden fruit, and when teens and young adults get their hands on it, the goal is to drink as much as possible, and as fast as they can, without ever considering the repercussions of, say, drinking half a bottle of New Amsterdam in the middle of a school week (legend has it, this really happens sometimes).

Don’t get me wrong, I’m not a stickler when it comes to alcohol consumption or the legal drinking age (hi, I’m in college, too!). But if it were up to me, I would have lawmakers seriously consider whether withholding alcohol from young people until the age of 21 is more helpful than harmful – especially when teens will find a way to drink anyway, and the media glorifies drinking to the point of blacking out. Okay, but PSA OVER, this isn’t about me; this is about the glorious country I’ve found myself in – Deutschland!

According to a 2015 report from Kirin, a Japanese beverage company, Germany ranks fourth in the world for beer consumption per capita, with 104.7 liters per person. To put that in perspective, the average American reportedly consumed 75.4 liters in the same year. 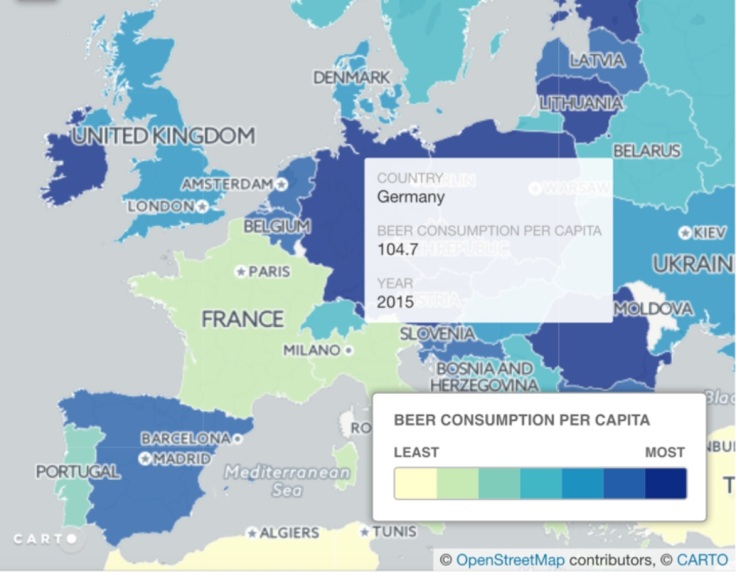 Well, the Germans definitely do things a little differently than we do in the States. For one thing, the legal drinking age for beer and wine consumption is 16, while hard liquor can be sold/served to people over the age of 18. Some proponents of the 21-plus drinking age might be appalled at the idea of giving beer to a teenager, but I can only speak from my own observations. Sure, it might be weird to see people at the peak of puberty buying alcohol and going to bars, but not once have I seen a German university student chugging tequila then jumping off of a rooftop into a pool (aforementioned proponents might argue that it’s because there are no pools in this frosty tundra, but I digress).

Along with the difference in drinking age, I was shocked and awed to discover a novel concept here in Germany called “casual drinking.”

Yes, I know, take a minute to collect yourselves … you can go out and have just one beer, then go home and do whatever it is you needed to accomplish that day. This may be due to the availability of alcohol from a younger age, but also the fact that beer is everywhere – cafés, restaurants, the university dining hall, VENDING MACHINES, the list goes on. The most surefire way to identify yourself as an American during a night out is to drink too much and speak too loudly about how much you miss (insert favorite pizza place, junk food, etc., or in my case all of the above) back home. 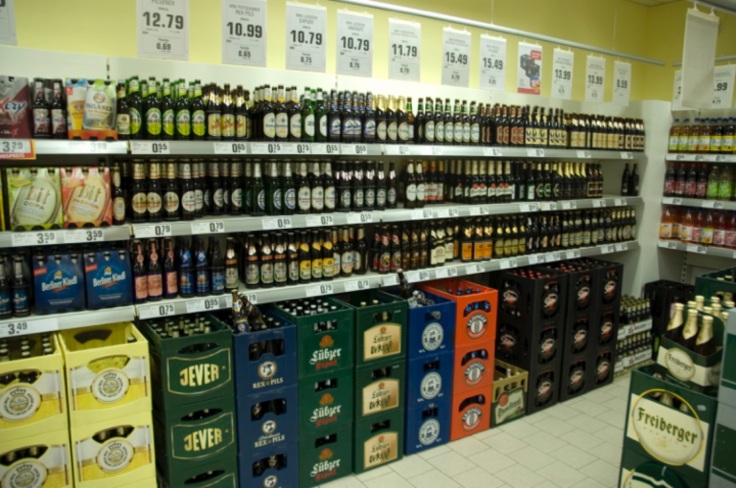 In Germany, it is not out of the ordinary to pair your morning wurst (like sausage, but better) and brot (like bread rolls, but SO MUCH BETTER) with a liter of the local brew. Oh, and breweries are plentiful. In fact, a guide from Marburg’s tourism office stated that each household in this town in the 16th– and 17th-centuries had a cellar for the sole purpose of brewing its own beer, which was more plentiful and available than plain water at the time. Today’s larger breweries reflect those years of crafting and perfecting the recipe for locals’ well-loved bier. There are well over 60 breweries in the state of Hessen alone, but each region of Germany has its own unique taste.

Oh, yeah, there’s also the higher alcohol by volume of German beers! It’s slight, but the difference was enough that the orientation packet from my university explicitly warned us to be careful. A typical beer has between 4.7 and 5.6 percent ABV, while Corona Light and Bud Light each have about 4.2% ABV. Beers are also sold in liter-sized bottles in grocery stores, while 6-packs in the U.S. contain 12-ounce bottles. “But Julia! That’s so much wasted glass!” you might say. However, the Germans are nothing if not eco-friendly. When purchasing anything in a plastic or glass container, you pay a deposit (usually about 0.12-0.25€) called a Pfand, which you can get back once you return the containers to any of the very conveniently located recyclable machines inside every grocery store. 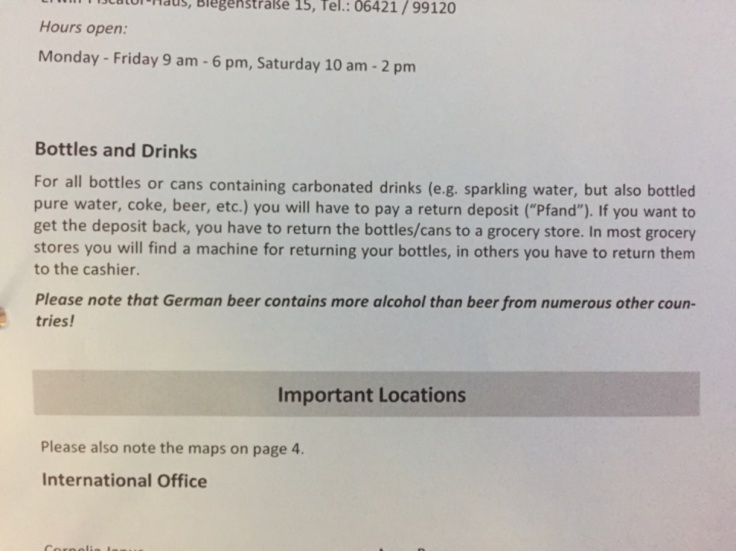 Well, there you have it, folks. I could talk about beer and all its wonders forever, especially after living in country with such a rich appreciation and history, but instead I will leave you with one more fact:

Germans can open a beer bottle with anything.

I’ve seen bottles opened with lighters (a pretty amateur skill, I’m told), other beer bottles, rolled-up newspapers, and, once in a particular bind, a metal fork (yes, the kind you eat with!). I’m as far as can be from being considered a German at heart, hard as I try, but I’m confident that once I can open a beer bottle with the nearest hard-ish object like a 2017 MacGyver, half the battle will have been won.

Thank you for reading, and the next time you settle down for a delicious pint (or liter!), make sure you cheers your neighbor and say “Prost!”

Julia Jaramillo is a junior majoring in public relations and double minoring in English and international studies. She is studying at the University of Marburg in Germany in Spring semester 2017.